This is an excerpt from statement made by OPEC during its last meeting in Vienna on Thursday, 27 November 2014:

“Recording its concern over the rapid decline in oil price in recent months, the Conference concurred that stable oil prices – at a level which did not affect global economic growth but which, at the same time, allowed producers to receive a decent income and to invest to meet future demand – were vital for world economic wellbeing.  Accordingly, in the interest of restoring market equilibrium, the Conference decided to maintain the production level of 30.0 mb/d, as was agreed in December 2011”

As you can see from the chart below, oil production from OPEC member countries has in fact increased over the last couple of months from 29.5 mil barrels per day to more than 30 million barrels per day. Global oil demand is about 93 mil b/d, of which OPEC controls one third of global oil supply.  The world has been watching at OPEC for cutting of its supply to put a stop into declining of oil price. However, the decision to keep supply to 30 mil b/d has hurt the price and causing oil price to drop to 5 years low.

But why didn’t OPEC cut its supply?  General view is that it has got to do with OPEC’s internal politics. Like all cartels, OPEC has what economists call a collective action problem: All members benefit if they work together to limit oil production, but it’s in each individual member’s interest to sell as much oil as possible. A sensible move should be cutting production to move the price up but they have just done the opposite. It is believed that the big brother like Saudi Arabia has been unwilling to play the part of “swing” producer anymore for the fear of losing market share.

The low oil price has caused big issue to several of OPEC’s members which are dependent on high oil prices to balance their budgets. Countries like Venezuela can’t afford to let prices fall. With the current low price,  they also can’t afford to pump less crude. So, it is a pretty bad economy cycle. Because of falling price, they need to sell more to keep up with the income. 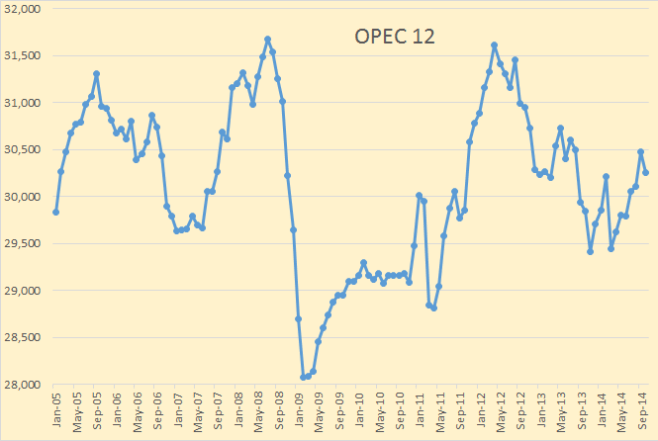 The low price of oil is here to stay, and likely to tumble to an even lower level of $50 per barrel in my opinion as not only OPEC decided not to reduce its oil production, US on the other hand has increased oil production to close to 9 mil b/d. As you can see on the chart below, US oil production has been in the uptrend in the past 10 years. US wants to maintain its interest and reduce reliance on middle east for oil. The increase in oil production in US has played an important role in its economic recovery. Should US only rely on imported oil, the price at pump will become so unaffordable that is going to hurt its economy.

According to Bloomberg, US will remain as the largest oil producer this year after taking over Saudi Arabia, and Russia.

It is back to demand and supply. With more and more oil been drilled, and the demand stayed about the same, oil price will stay low for this year and the rest of 2015. And remember some oil producers have started making statements that they could sustain with low oil price and still making profit if price stays at $40 per barrel?  These are signs that price could move lower and it is only logical to move lower.

My name is Hock Lai and I am an independent trader with trading portfolios in KLCI, FKLI, FCPO, Hang Seng, and stock options in US. Apart from actively trading with technical analysis, I hold a few value stocks in my portfolio based on fundamental analysis. Click to view more....